Seiko 5. Bold designs that speak volumes about those who dare to wear the Seiko 5. The inspiration lies in the edgy designs and dramatic colours, that come together with an innovative automatic movement that defines the very spirit of a Seiko 5.

From the very start, Seiko 5 was a watch whose performance would serve the demanding needs of the new 1960’s generation, who cared less for tradition and more about life. The watch had five key attributes :
1. Automatic winding
2. Day/date displayed in a single window
3. Water resistance
4. Recessed crown at the 4 o’clock position
5. Durable case and bracelet

The technology behind the legend

From the start, Seiko 5 was designed to break the mold of watch performance and to bring to the young 1960’s generation a watch that belonged to their age and that fitted into their lives. As perhaps never before, young people of the day saw no limits to their aspirations. Seiko 5 needed to be a watch that could go anywhere and everywhere. The first challenge was durability. To be durable, a watch needs to be impervious to two threats; water and shock.

Water resistance was built in as standard to every Seiko 5 watch, and metal bracelets were used so that, from buckle to buckle, the watch was resistant to water and sweat. Shock resistance was assured with two Seiko inventions. First, the mainspring was made from “Diaflex,” an unbreakable alloy, and the “Diashock,” system was created to protect the movement from shock within the case.

Legibility was the next vital attribute. Today, we take for granted that day and date are presented in a single window but, in fact, this was an idea built in to Seiko 5 to enhance the legibility of the dial. The genius create a unique system that allowed both day and date to be shown in one plane.

The final challenge was to create a distinctive look that defined the brand. Thanks to the extraordinary Seiko invention of the ‘Magic Lever,’ the winding efficiency of Seiko 5 is very high, and the wearer rarely needs to use the crown. So the designers made it smaller and hid it under the lip of the case at 4 o’clock, giving Seiko 5 its signature look.

Seiko began producing its Seiko 5 line of automatic watches back in 1963. Since then watch enthusiasts around the world have come to recognize Seiko 5 as reliable, affordable and well respected watches. Over the last 50 years Seiko has produced thousands of different models in the line.

The company was founded in 1881, when Kintarō Hattori opened a watch and jewerly shop called “K. Hattori” (服部時計店 Hattori Tokeiten) in the Ginza area of Tokyo, Japan. Eleven years later, in 1892, he began to produce clocks under the name Seikosha, meaning roughly “House of Exquisite Workmanship”.

The first watches produced under the Seiko brand appeared in 1924. In 1969, Seiko introduced the Astron, the world’s first production quartz watch, it cost the same as a medium-sized car. Seiko later went on to introduce the first quartz chronograph. 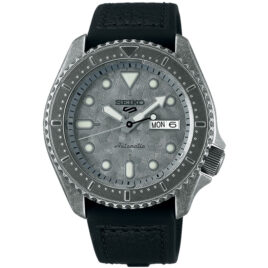 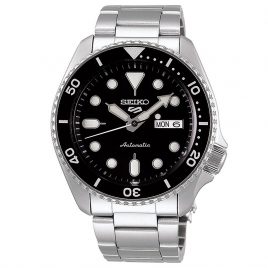